This Aquarama is a super Aquarama which we restored back in the days (beginning of 2000’s). In 2012 she came for sale at our firm Classic Boats Amsterdam and she was still in great condition – and sold.

Motor Boat and Yachting magazine has referred to the legendary Riva Aquarama as “the epitome of luxury sports boat chic.” Easily the most photographed boat in the world, the Riva Aquarama is the pinnacle of wooden boat design and has been the sports boat of choice for generations of celebrities and the elite, remaining one of the most sought after classic boats today
If you would like to receive some more information about restoring or some general information about classic wooden boats.

After stringent testing of the 1962 prototype, the Lipicar, the Aquarama entered production in 1963. The hull was completely identical to that of the Open Tritone, whose production was ended, with many technical and functional improvements. The most obvious were the anchor housing in the bow closed with a hatch, the raised edge to the fore deck and the varnished Honduras dashboard and its rim with the new VDOs. The front seats were separated, with a pocket on the rear of the driver’s backrest and a folding shelf on the back of the other. The recessed sunbathing area in the stern was tapered unlike that of the Tritone and was easier to reach from the bathing ladder thanks to a non-slip area set into the stern deck. There was considerable research to improve noise and cruising comfort. The sides were initially still of carvel, but laminated sides were fitted starting from # 4. The upholstery of the first models was white ribs with black borders and orange trim. From the end of 1963 also the Super Aquarama was on sale.
The 1964 series was enriched by the updates described for the Tritone, plus a new icebox located under the cockpit sole between the two rows of seats. The sole was now fitted with sliding hatches instead of hinged ones. From # 34 the bottom was modified in the same way as that of the Tritone. Chrysler engines were used in 1966 and some prototypes produced with different bottoms, the bottom of # 178 was to be that of the 1967 series. As well as the new bottom, sweeter for cruising, the Aquarama and Super could flaunt the new Riva engines, outcome of the collaboration between Riva and Crusader. Furthermore, a marine WC was installed under the bunk and the upholstery was now turquoise/ivory for the Aquarama and lobster/ivory for the Super.
The 1969 series, with # 309, had a new, more raked stempost, with new cutwater and a new bow cap whose design consisted of a single air intake instead of the previous two. 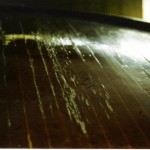 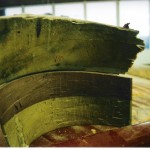 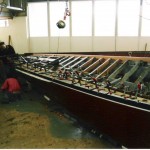 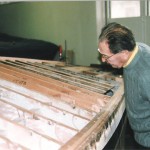 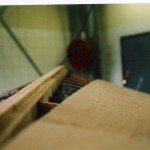 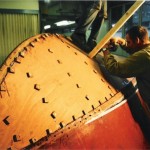 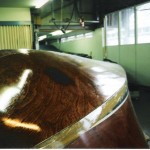 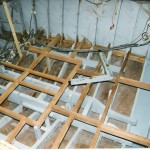 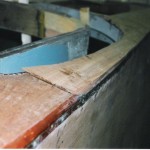 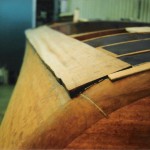 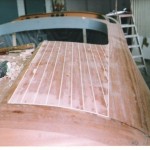 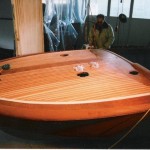 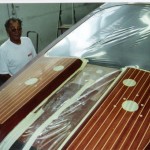 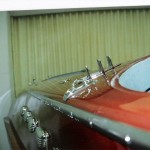 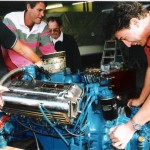 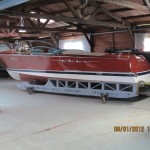 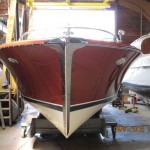 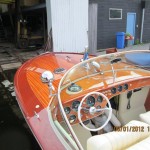